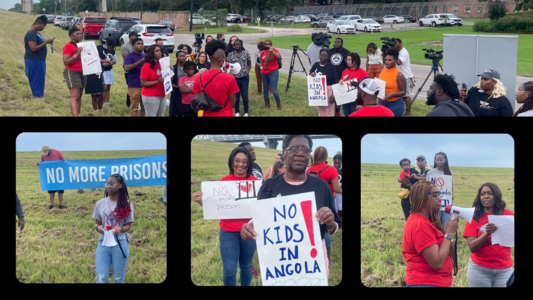 This inhumane, egregious, and dangerous move is in direct contrast with the Youth Master Plan vision, goals, and solutions, specifically those outlined in Safety & Justice and named by the Youth Advisory Board of CYPB.

–> I oppose the plan to house youth in Angola! Punitive approaches that expose youth to additional violence and abuse don’t work and only aggravate their existing trauma! Sign the petition! https://bit.ly/NoKidsInAngola

–> The plan to house youth in Angola is cruel and outrageous! Youth need safe, healthy environments and rehabilitation. Instead, the state continues to ignore the needs of young people and perpetuate a cycle of harm. Sign the petition! https://bit.ly/NoKidsInAngola

HERE’S WHAT WE KNOW:

Housing youth in the same facilities as adult inmates is in violation of children’s human rights and safety. Angola State Prison is considered the U.S.’s largest maximum-security prison, is known to be one of the most violence prisons in the United States, and was nicknamed the “Alcatraz of the South.” Children should not be relegated to Alcatraz or Angola.

When systems fail to be proactive and responsive in developmentally appropriate and compassionate ways, we fail all our children, from birth to 24. Our systematic approaches to discipline, rather than positive youth development and healing, are punitive, trauma-inducing, developmentally inappropriate, and perpetuate racism.

“The Governor’s plan to house youth at Angola State Prison is cruel and outrageous. Angola is an adult facility built on former slave quarters that is historically known for horrific violence, abuse, and sexual assaults caused by institutional and systemic violence. To house children at this facility and under the same harsh and violent conditions as adults demonstrates the Governor’s lack of understanding of developmentally-appropriate rehabilitation and commitment to dismantling systems of racism and oppression in Louisiana.”

The children and youth of New Orleans are not broken or damaged. They can rise above circumstances and have the ability to define their own path.